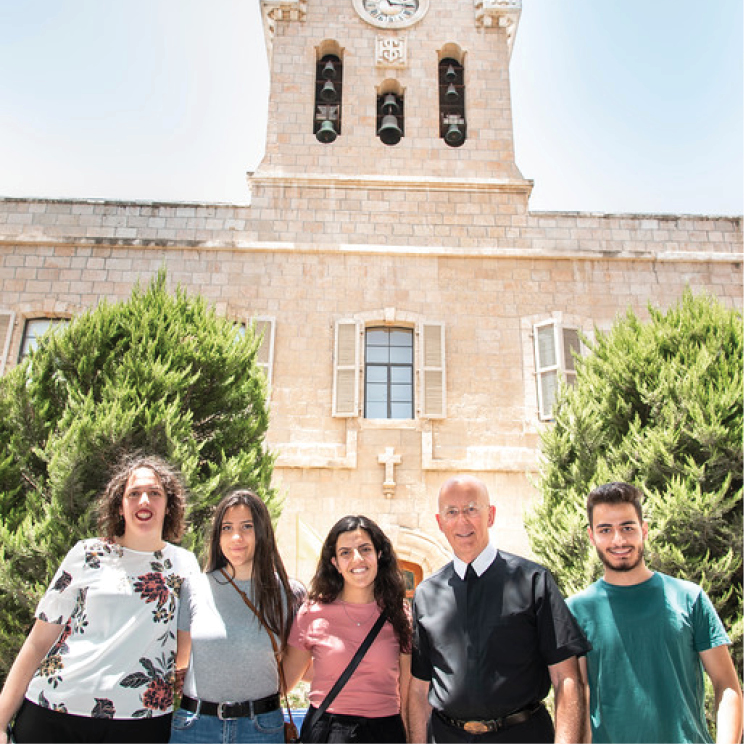 Br. Peter Bray, currently the Vice-Chancellor of Bethlehem University, has climbed a few mountains in his time. A proud New Zealander, he was born in a rural town under the shadow of spectacular Mount Taranaki on the North Island. Mountains conquered in a varied career and ministry as a De La Salle Brother have been appointments as a director of a diocesan education centre in Wellington , N.Z, a Lasallian formation team member, and a three-time Catholic school principal – in New Zealand and Australia.  He has found time also to achieving a doctorate in education in USA.

Since November 2008, Peter has been the Chief Executive Officer of Bethlehem University, in the town of Jesus’ birth in Occupied Palestine. He directs the academic, administrative, financial and support affairs under the policies of the International Board of Regents. Challenges abound, as Peter himself says on the District blog site. Palestine is a kaleidoscope of complex political, financial, social and environmental pressure points. There is the “unpredictable nature of life here and the restrictions we are working around” in a tertiary institute of 3360 registered students, and a faculty and staff of 376.

A LIGHT ON THE HILL

Reaching soon its fiftieth year, the University sits on a highpoint above the Palestinian city of Bethlehem, fabled as the birthplace of Christianity. For its Vice Chancellor, it is a beacon of hope for the vast majority of Palestinian students. Br. Peter finds

“a sense of being part of something much bigger than myself…Some extraordinary students here …inspire me and make me so grateful to be here”….One student told Br. Peter about his family’s tragedy:

The tertiary centre of learning is a Catholic co-educational institution in the Lasallian tradition, whose mission is to provide quality higher education; it is open to all faith traditions. It was the first university established in the West Bank, and can trace its roots to 1893, when the De La Salle Brothers opened schools in Bethlehem, Jerusalem, Jaffa, Nazareth, Turkey, Lebanon, Jordan, and Egypt.

Initially, it was to be a joint venture of the Vatican and the De La Salle Brothers. Three Brothers with other faculty began operations in 1973 with 112 students.

Since then, despite being closed twelve times by Israeli military-imposed orders, the longest of which was for three years from October 1987 until October 1990, classes have continually been held on- and off-campus. The curfews, travel restrictions, military checkpoint harassment, and the negative impact of the Israeli military occupation of the West Bank, are all mountains to climb for students today.

The Catholic Bishops in Peter’s homeland have been insistent over 20 years on the rights of the Palestinian people to live in dignity and freedom, in an independent state., In July this year they had called for a re-start to the peace process between Israel and Palestine, in a region which sees “violence, bloodshed and intransigent bickering at regular intervals, and where Israel continues to establish illegal settlements on Palestinian land in the West Bank.

Br. Peter travels regularly to raise awareness of the seemingly insuperable antagonism, of the resultant complex problems for the University, and of the need for financial support for further educational programs and infrastructure. In 2015, before Pope Francis, he gave an inspiring address at the Vatican Education Congress. With the COVID crisis, the University was closed for three semesters, as in the rest of the world. On-line learning, the loss of tourist income and social freedoms all impacted on needy students.

Peter will be in New Zealand in January & February 2023 to speak of the challenges and to spread the good news of achievements since then.