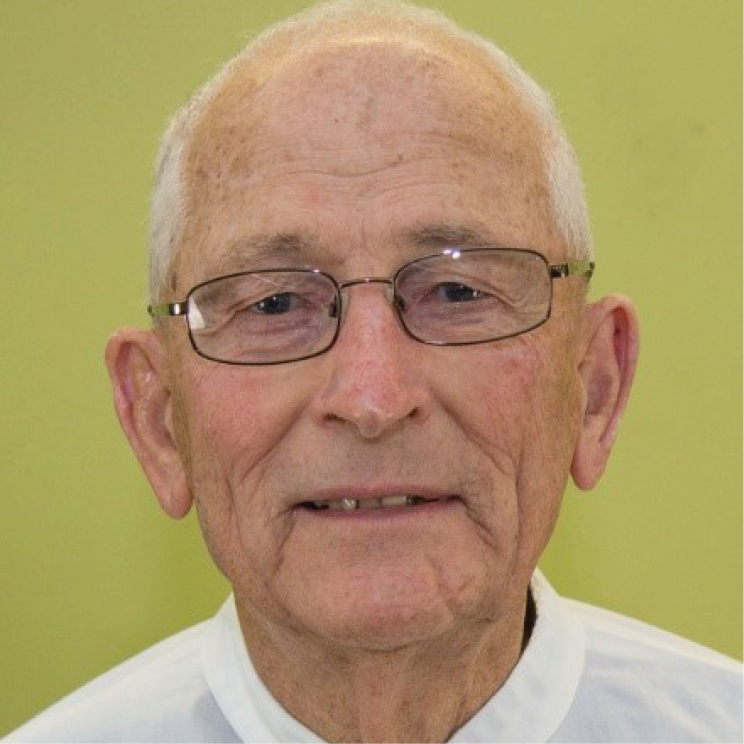 Br. Hilary was born Leo Walsh in the solid working-class suburb of Coburg, Melbourne in 1930, just prior to Australia’s Great Depression. His father Ed ran a successful retail dairy business, and his son in later years has been reputed as a man who spread the milk of human kindness. Leo’s mother, a devout Catholic, cared for the local St. Paul’s church, and ran fund-raising activities, as Leo did later, in his life as a Brother.

With both parents heavily involved in the dairy business, it was judged best for he and his elder brother to go to a boarding school. Three years after his brother Brian, later an accomplished priest, he too became a boarding student at the new St. Bede’s College, on the bayside at Mentone. In those straitened war years, the boarders dubbed it ‘Starve You College’. Within two short years, he was so impressed by Brothers, especially Anthony Hayes, that he transferred to the Junior Novitiate of the Brothers at Castle Hill NSW, at the tender age of 13. The Brothers’ training regime was quite wooden and traditional, it was said, as the ‘Juniors’ pursued secondary studies.  In 1944-45, with no radio or newspapers available, the Second World War was a distant event.

The spiritual training years of 1947-48 - the ‘Novitiate’- was a “more relaxed style of life” with an innovative American Novice Master, Br. Francis de Sales, perhaps imitating his saintly namesake. Br. Francis “struck roadblocks periodically” with superiors, one being his desire to give his charges a home holiday before these years of Novitiate. Two years of teacher training followed for the now Br. Hilary, with Brothers coming from their school communities to give lectures on the teaching craft and life “in community.”

Despite having to learn Latin - a gruelling activity for Hil, as he is affectionately known - at 20 years of age he was posted to the other bayside community at Cronulla, where with Brothers Dermot and Eunan he taught in the small primary parish school. De La Salle Cronulla, founded by the Brothers in 1936, was a small boarding school or 30-40 students among the larger high school, taught by several Brothers including Leo Caldwell and Vincent Cotter. Memorable incidents were swimming in the old property’s pool in Gunnamatta Bay, as well as Hilary’s stint in hospital. The reason was a bad facial and body rash developed from his bedroom in the refurbished chicken coup!

After 4 years, in 1955, he was transferred to a new venture for the Brothers at Scarborough, Queensland. (Together with new schools in Beverley, South Australia and Midland Junction, Western Australia, De La Salle Scarborough was significant in expanding the District nationally). Here was the first incidence of Hilary being chosen for a new foundation. It opened with 82 boys, and, with Brs. Leo and Kevin, began in a reconditioned army hut. The vision and financial underpinning provided by Mons. Bart Frawley, P.P. allowed for the opening of a boarding section in 1959.

The Brothers, says Br. Hilary, were “very conscious of building traditions in this new school”, and, despite the extra labour of a boarding school, he saw the establishment as having a bright future. These were very happy years for him. Having been a young boarder at St. Bede’s, he knew the issues arising for youth away from home, and he provided a listening and supportive ear to the upwards of 300 boarders over some quickly- growing years. He was very conscious of the needs of pastoral care and good food, and worked well with the Matron of many years, Mrs. Butler.

In 1964, Hilary was appointed to another boarding school, his old school at St. Bede’s where he spent 8 years, before being transferred to St. Michael’s College Henley Beach 1973-78. For the last three, he was effectively the Principal of the primary section at Beverley.

His skills and conscientious labour were recognized in his appointment as District Mission Secretary in 1971. A missions fund co-ordinator had been urged by the District Chapter, a role, which Hilary says he relished. This he held, over 26 years – 1971-88 and 2000-05.

The job wasn’t easy, he mentioned, as he was still a full-time teacher, but it gave him great satisfaction, experiencing “extraordinary generosity of many businesses and Rotary Clubs in Australia and Moresby, not to mentioned the open-hearted giving of various Lasallian schools, initially in Victoria and Adelaide. Gradually many Lasallian schools took on the concept of “MAD” activities.

These “Mission Action Days” became a great feature of school calendars, where senior student leaders marketed, encouraged and inspired their communities to fund-raise and to build spirit with walkathons and fun activities.

Hilary was sent to Papua New Guinea to see the many needs of the Lasallian schools on the ground, and a main one was medicine. Each year, in October-November, he prompted schools to provide various medicines on the PNG Education Department lists, which were unavailable in PNG. He then negotiated with chemists and medical warehouses to access medications, paid for from the fund-raising of schools and individuals. There was even the donation of bedsheets; he gathered a group of ladies to tear these up into bandages for transportation. There were other school resources needed as well. One Adelaide family offered its garage on a semi-permanent basis to store goods to be transported north to PNG. There were many hours offered by Hil in holiday time organization, and there was the “tremendous amount of satisfaction” he felt from his ministry to poorer youth.

CONCERN FOR THE STRUGGLERS

Br. Hilary’s next appointment of ten years at De La Salle College Malvern provided another source of enrichment and joy. There, as a junior secondary teacher of Maths he developed strong skills in remediation work. In 1984, he gained a graduate diploma in pastoral guidance.  Students on practicums from Mercy Teachers College were sent to him for supervision. He was known for writing full supervisory reports. With his strong discipline of sometimes wayward, distracted students, he had the patience and relational skills needed to bring about change in his charges. He was even offered a position at the Teachers College as a visiting lecturer.

A new chapter of his life opened when Hil was asked to be part of the three-Brother community at Derby, W.A. in 1989. The Holy Rosary primary school, fairly remote, had a population of 98 mainly Aboriginal children; within a week there were 182 students! Hil was the Director of the community, and also Principal in his last year (1993) there. His highly successful home visitation of non-attendee students showed his care for youth, as did the qualified and devoted women teachers, and the indigenous teacher aides.

Perhaps it was an easy decision for Br. Visitor, Kevin Moloney, Principal of Adelaide during Hilary’s time there, to appoint him to another new ministry for what Hil called “the real poor” in Hohola, Port Moresby, PNG. Here in 1995, he was, at 65 years off age, a significant support person for Br. Denis Loft, Director, in the Youth Development Centre.

Unsurprisingly, after three years, he was asked, yet again, to bolster a new opening of a community in New Zealand – this with two other Brothers at John Paul College, Rotorua. The role was Careers Advisor for two years.  For the final 14 years of his ministry life, Hil was a ready ancillary person in administration in three Lasallian Melbourne schools and at yourtown in Brisbane.

What is striking about Br. Hilary Walsh’s ministry is his focus on struggling youth in their ups and downs, and his sensitive and attentive presence to the marginalized, those ‘on the outer’. Boarders, remedials, disenfranchised indigenous learners all received his attention. For decades, he was the face of the “Missions” and their needs, on the home front.

Equally, a pattern in his life was his being chosen to be a valued stable presence in several new foundations of the Brothers, and in building healthy Brothers’ communities.

The calm mind and sense of fulfilment is obvious: “No appointment did I feel antipathetic about…I had taken a vow of obedience…all the jobs were within my capabilities…I felt enriched.”