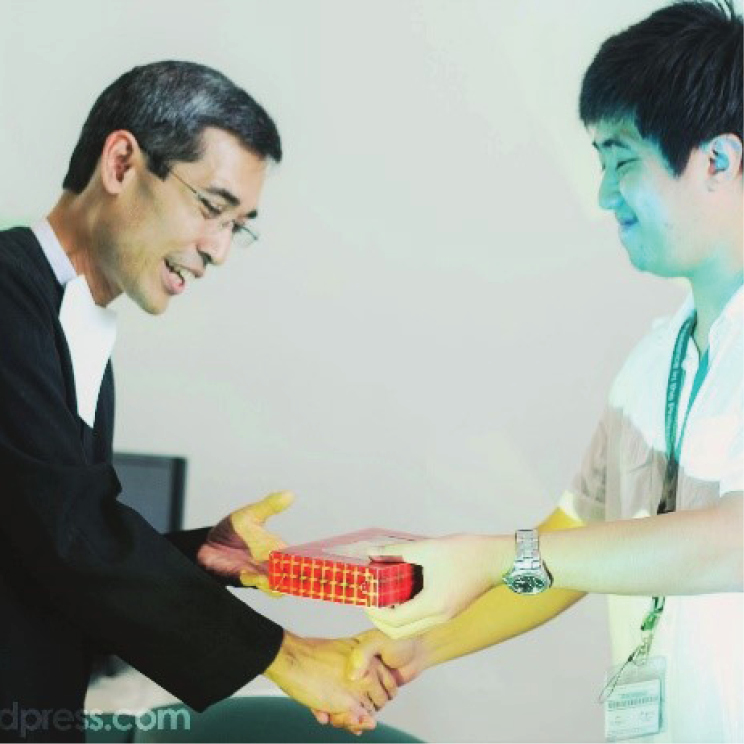 People in the public eye, whether it be in business, politics, health, or education, must measure up, especially in a globalized world. For Brother Ricardo Laguda, Rome-based General Councillor in the international De La Salle Institute / Lasallian Family, it is par for the course.

Br. Ricky, as he is known, has been a General Councillor to the Superior General for the last eight years, and has just been re-elected to that position at the recently concluded General Chapter of the Brothers. A Filipino, with four brothers, and eight nieces and nephews, he is the second eldest in his family and was attracted to the Brothers’ way of life from his schooling at age six.

“I like teaching, and the Brothers have been good examples and witnesses of the …(Catholic) faith.” He was impressed with-

“Brothers’ style of life, and their concern for all students. The Brothers who were my teachers in high school were all good at teaching their subject areas, and developing healthy relationships with all the students”.

Br. Ricky’s role in his original home District of the Philippines prepared him for the Councillor role. He has been involved as a missionary in Papua New Guinea, in a position of oversight of adult formation, campus ministry work, and social action, as well as teaching Religious Education in La Salle Green Hills, Manila. His qualities were shown in his appointments as Director of Novices for the Asia-Pacific Region (PARC), President of various De La Salle educational works – outer Manila in Araneta and Canlubang in Laguna (now part of De La Salle University) - before being a leader of the prestigious De La Salle University of Manila. Later, he was chosen as Sector Head for the Philippines.

The present role as an international Councillor is wide-ranging. Primarily it is to animate and accompany the Provincials – Brs. Visitor – of Districts in a particular region, our District of ANZPPNG being a member of the PARC region. Animation involves ensuring, in Ricky’s words, “greater synergy and collaboration in the Lasallian Mission within the Region”. The General Council often has projects and appoints committees that fulfill stipulations of the previous General Chapter. While residing in Rome, Ricky is the point of contact for PARC programs and has a team of two other Councillors to assist.

How is PARC unique? For Br. Ricky, it is “different in its focus and way of understanding and interpreting the Lasallian Mission”. There is “uniqueness in terms of culture, language, pluralism, religion, and secularism”. Yet, there is a similarity in that every Region exhibits the above indicators. The sense of internationality is in “our love for the Founder and his charism/spirituality, and the way we express our fraternity for one another, with special attention to educating those in the peripheries”.

The strengths and challenges of PARC, according to Br. Ricky is:

it's capacity to contribute to ‘inter-religious dialogue, and how dialogue can be understood as a mode of evangelization. PARC can also contribute to the area of understanding Association and the Lasallian Family, not so much as a commitment but as a way of living the charism and spirituality in different parts of Pacific / Asia. One area that needs improvement is the collaboration between countries within PARC when it comes to participating in common projects like APLYC (youth conferences), APLEC (educational leaders conferences), “Beyond the Borders”, and possible regional projects in the future, that involves being with those “in the peripheries”.

As for the ANZPPNG District, he highlights “the Lasallian formation of Partners, Pastoral Ministry of Youth and Vocations, and the capacity of its Partners to be part of the decision making at different levels and forums of the District. One area that needs strengthening is where and how else can the District focus on promoting the Brother’s vocation, especially in Australia, New Zealand, and Papua New Guinea”.

What of the future in the Asia-Pacific region? Br. Ricky notes that the General Council is exploring other types of groupings, based on similar characteristics across Districts. Grouping by geographic configuration could remain, but other possibilities could be criteria/dimensions such as Young Brothers, Middle-Aged, Seniors, areas with no Brothers, or those with Mission Councils – all to serve the best interests of the mission.

On a personal level, difficult times are decisions to close a Brothers’ community or a particular ministry; when a well-known Brother dies; if a young Brother decides to leave the Institute. Another- quite harrowing -sadness is where the Brothers have to endure false accusations of abuse.

One of Br. Ricky’s best moments, he says, is interacting with dedicated and sacrificing Partners and Brothers. Another is “Brothers and Partners being together in work, prayer, or ‘breaking bread’, and sharing their life experiences and deepening their sense of ‘fraternity’”. Lastly, the shining witness that is given to those “on the peripheries”.