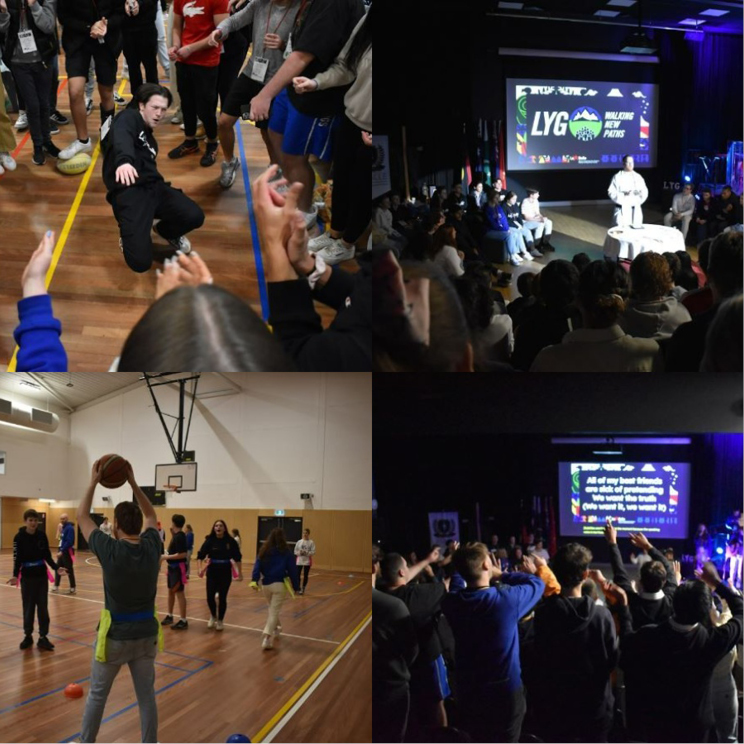 The perspective of a Youth Minister

I think it is impossible to describe the entire experience of LYG in words - it is an event that you have to encounter, to witness the sense of joy and connection, and the presence of the Holy Spirit living amongst and between people to understand. With that said, here (Maeve Galvin, Youth Minister from Tamworth) is my best effort:

The event began with the delegates sitting with their school groups during the plenary sessions and eating breaks. They got involved with the great songs and music and met their small groups. These groups pre-allocated with students from other schools would act as a family for them for the duration they were there.

By the next day, students began to open up. They were talking about their experiences with each other and beginning to forge strong friendships. The sports tournament allowed the students to bring out their competitive sides and work together as they versed other small groups. The sports included ultimate handball, capture the flag, blindfolded stacks and a ping pong challenge. The sports tournament allowed the Lasallian values to shine through, with students helping and encouraging each other to create a strong sense of community.

Day three was the pinnacle of LYG, with students coming together as one in the Lasallian Spirit, sharing stories with each other, both the successes and the struggles. This was the day where it felt like we were all walking alongside each other. This shared experience of accompaniment allowed for a constant journey of self-discovery, creating an everlasting and communal bond. Perhaps one of the highlights of the whole event were the talents showcased - both during the talent show and during the day. Students felt brave enough to stand up and present their true authentic selves to be met with their peers' unfaltering support and excitement.

The final day of LYG was a day of farewells but not goodbyes. Each school was given a chance to consider what they wanted to take back to their communities from this gathering. Seeing people both excited for the next steps and sad to leave was truly touching. People exchanged contact details and took photos to attempt to capture some of the spirit that they had experienced. Students left knowing that though this gathering was over, they had new paths to walk and a community of people walking alongside them.

Highlights from the LYG Keynote Speakers who we thank immensely for giving their time and expertise to all who were present.

“Nothing for us, nothing without us”. “How are the voices of young people being engaged at every step?” - Tracy Adams, CEO yourtown. Tracy spoke after completing a 70 km trek in the middle of Australia.

“You never know until you go.” “Use your smile as a compass.” “Path lead to new paths.” - Franco De Joya, Oakhill Graduate and former Oakhill Youth Minister, Lasallian Volunteer in DLS Mangere, slam poet and co-founder of an Educational Hack-a-thon.

“You are the only expert of yourself.” “Be loyal to the royal within you.” - Lydia Avia-Aumua, Learning and Development Consultant for yourtown, qualified mental health first aid trainer and is passionate about hospitality through food.

“This is just the beginning. Jesus walks and eats with us.” - Luke Bulley, Passionist Priest, has South African roots and served on the Passionist retreat team based in Brisbane before entering religious life.