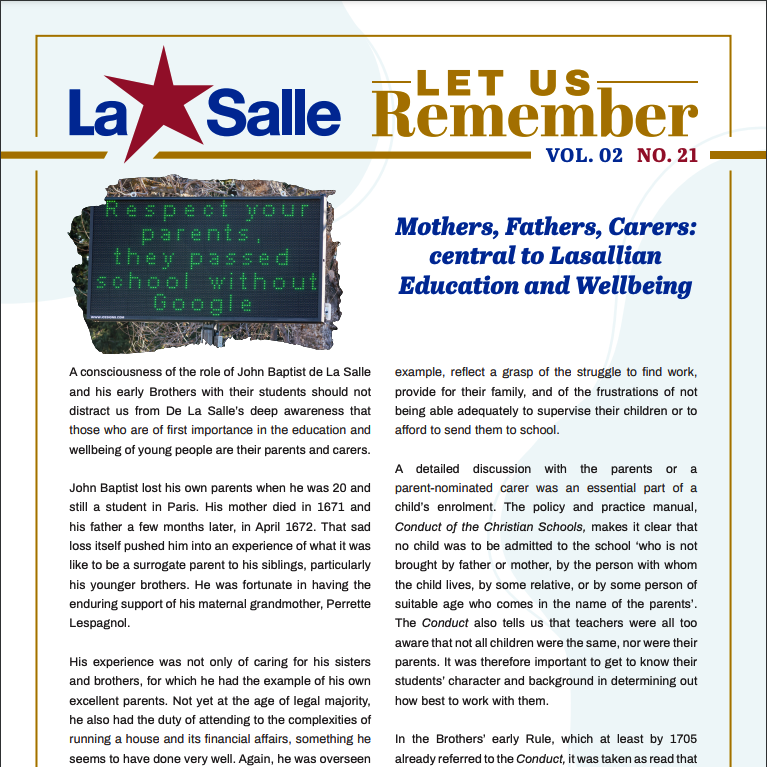 A consciousness of the role of John Baptist de La Salle and his early Brothers with their students should not distract us from De La Salle’s deep awareness that those who are of first importance in the education and wellbeing of young people are their parents and carers.

John Baptist lost his own parents when he was 20 and still a student in Paris. His mother died in 1671 and his father a few months later, in April 1672. That sad loss itself pushed him into an experience of what it was like to be a surrogate parent to his siblings, particularly his younger brothers. He was fortunate in having the enduring support of his maternal grandmother, Perrette Lespagnol.

His experience was not only of caring for his sisters and brothers, for which he had the example of his own excellent parents. Not yet at the age of legal majority, he also had the duty of attending to the complexities of running a house and its financial affairs, something he seems to have done very well. Again, he was overseen and supported in this work by a family council that included his grandmother Perrette. He had first-hand experience of what parents, at least in his own comfortable circle, had to contend with.

Moreover, De La Salle’s writings reflect a compassionate awareness, from his subsequent experience, of the much more difficult challenges facing parents of poor families. The first two of his Meditations for the Time of Retreat, for example, reflect a grasp of the struggle to find work, provide for their family, and of the frustrations of not being able adequately to supervise their children or to afford to send them to school....