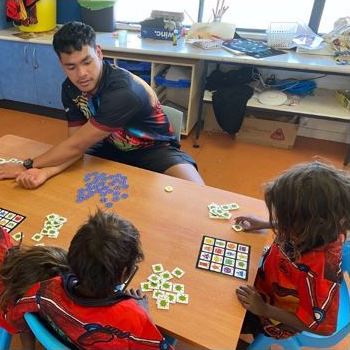 A desert community of 400-500 Kukatja people in the Kimberley region of Western Australia. From Alice Springs in the middle of the continent? - the distance from Melbourne to Sydney (800km.) The Wirrimanu community has been the site of a Lasallian mission school and presence for most of the last 35 years.

Barry Ennis has been Principal there for the last four years. On arrival, he was impressed by the pride taken in Luurnpa Catholic School, where the parents of current students themselves studied. Today, the school has a varied curriculum, fostering Kukatja literacy and aboriginal culture, together with Religious Education, and general literacy and numeracy. Each week, classes ‘go on country’: developing their skills alongside local artists at the Warlayirti Art Centre, learning in the garden, engaging in story or music/dance. In conjunction with an elder, a two-year cycle of study has been developed.

The Principal indicates the values that are taught, or “‘animated’ via the daily whole school assembly, where the Angelus is recited, as are our school values – ‘We are Learners! We are Responsible! We are Respectful! We are Safe!  We are Strong! We are Balgo!’ These values are the basis for our Positive Behaviour for Learning approach”.

The local community’s ancient story is threaded into the start-of-year events, through a ‘school induction. As Barry says:

“We have an excellent ‘school induction’ each year whereby the elders of the community take the staff, and others new to the community, through the ‘Balgo Story’. The early mission has left Balgo with a strong educated group of elders who are deeply committed to their Catholic faith. The community still identifies very much as Catholic, and community meetings begin with prayer. Weekend Mass, mainly in the local language, Kukatja, is led by Church Elders and is well-attended.

The local people came into contact with Western and Catholic missionaries in the 1930’s. The German Pallottines wanting to establish a mission in this unspoilt Kimberley region. Fr.Ernest Worms was “one of the first mission anthropologists and the first Pallottine in Australia to gain wide recognition for his work on Australian religion and rock art in the north-west” of W.A. From 1939, the German order’s brothers and priests roamed the Tanami Desert, seemingly imitating the Israelites out of Egypt, testing various sites before settling at “Old Balgo” in 1942. It was “a site for large corroborees and initiation ceremonies. Walmadjiri and Kugadja people traversed the country in their hundreds”. Considered intruders by the indigenous tribes, and enemy aliens by the W.A. police, they had their guns confiscated, depending on the people to survive. Under the Bishop’s supervision, they built a mission, industriously making mud-bricks and dynamiting bores for water.

This extraordinary Catholic venture saw a group of Kugadja people wandering in from the desert. In 1951, Sr. Alice Evans, of St. John of God, became the first white woman at Balgo (until 1956). Thus grew the tribal Christian faith till 1965, when the mission was transferred to the present Balgo. (cf. the astounding history in  http://missionaries.griffith.edu.au/mission/balgoto glean a little of the intrepidity, zeal and perseverance of these Christian missionaries).

By the 1970’s, the De La Salle Brothers were considering how to serve the indigenous peoples more. A fact-finding mission by Br. Leo Scollen, a leading principal, led to three Brothers, n 1984, re-opening a Catholic school, with two Sisters of Mercy. It was requested by the local Kukatja community, led by a strong educated group of elders, deeply committed to their Catholic faith. Community meetings begin with a prayer, and the weekend Mass, well-attended, is led by Elders in the local language. Over three & a half decades, up to 12 Brothers committed themselves to the remote school, within a community of the famed Wirrimanu Arts Centre, church, store and an adult education centre (now a Trade Training Centre). 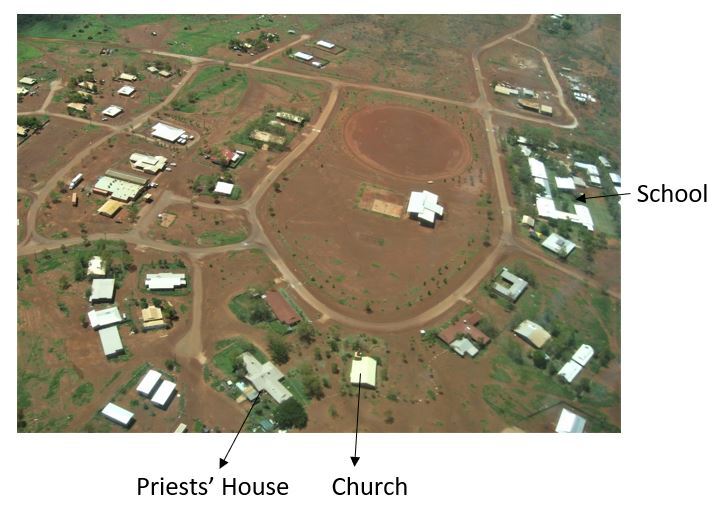 A major challenge was establishing a bi-lingual program of instruction. A critical part was the presence in the largely primary classrooms of Aboriginal Teacher Assistants (ATA’s). Dedicated teachers are recruited still from other Australian states. From 2004- almost without a break till now- young Lasallian Volunteers have been drawn to help, to discover, to explore and to learn to love the culture of the Wirrimanu community, part of five self-managed indigenous communities of the Kutjungka region.

A school, distant from city sophistications, demands support and networks. The Catholic Education Department and the W.A. Education Dept. provide critical modern resources and funded extra ATA’s and two youth workers. The Lasallian Mission Serviceshas taken a lead, in gauging interest in continuing the Lasallian tradition, put on hold, with the last two Brothers involuntarily leaving in 2017. Barry Ennis, the sixth Principal in two years, grabbed the opportunity having seen that “many people mourned the loss of the Brothers, and the friendship, strength and stability that they offered…The young and transient staff were finding it difficult”.

The Lasallian values and ethos were re-embedded with the resumption of the Lasallian Volunteers program in 2019. Encapsulated in “Faith, Service, Community”, the ethos can be observed in remembering the Presence of God, and invoking “Live Jesus in our Hearts”. The witness of young helping the disadvantaged youth is extended to branching out into the Community’s activities.

“Having these young, energetic, dedicated and resilient young people support staff, children and community has been absolutely wonderful” (Barry Ennis)

Various teachers and Volunteers refer to the Lasallian spirit:

"We see it everywhere. (The Lasallian ethos) We have strong values, pray every day, and continually promote positive energy."   (Zander)

"We love our St John Baptist De La Salle Day when we celebrate with all the children.  The elders love retelling the story of how they wanted Catholic Education for the kids, and how they had a big community meeting under the tree out the front of the school. They all remember Br Leo Scollen, the first principal."    (Susan)

"The work we are doing is consistent with the work the Brothers were doing with the marginalised people. As teachers, we try to reflect the approach of the Lasallian Brothers, who always emphasised teaching the students, using their world view and their language."    (Tom Vidot)

The challenge of recruiting and keeping a strong teaching team in the Australian Outback is being currently met: there is a nucleus of eight, includes three ex-Lasallian Volunteers - Tom Vidot, Rosy Setephano and Joshua Polkinghorne-Richards. This group has led the staff, from year to year, in striving for improvement.

Almost all teachers, says Barry, come to work with Aboriginal children, usually with some trepidation. “Almost all settle in after about a term, and soon grow to love living and working in the Wirrimanu Community. It is very challenging but rewarding work. The struggles bring people together, and the local people are beautiful, welcoming people. When circumstance means that it's time to go, many swear that they will be back”. Just appointed are two graduate teachers who have a Lasallian background - Melkorka Hilfarsdottir and Stephen Beirouti. Both will be classroom teachers in 2022.

In terms of learning, a core problem is that English is not the youths’ first language; they speak various languages, and English is ‘for school’. Not all parents may not see daily school attendance as foundational in their culture. Other important learning is done in country, not in a Western-style classroom. Critically, the Aboriginal Teacher Assistants are a bridge between cultures.

On a personal note, Barry says he and his wife Susan, had worked previously for five years at another Community – at Djarindjin/Lombadina. There was a sense of privilege they have in education in the Kimberley.  They are a part of the long line of pilgrims who have come to learn and offer to this proud people and their country.

“I would urge anyone who has ever considered this career move to jump at it. I can assure you that you will not regret it. It is life-giving!” 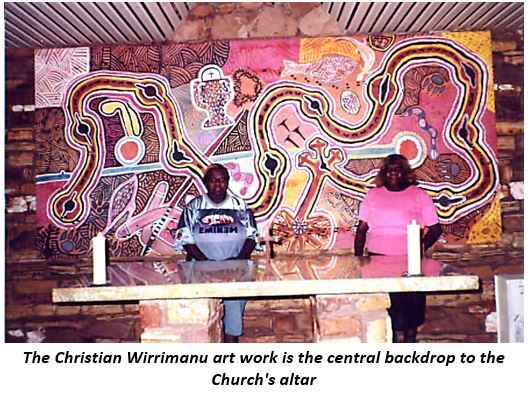 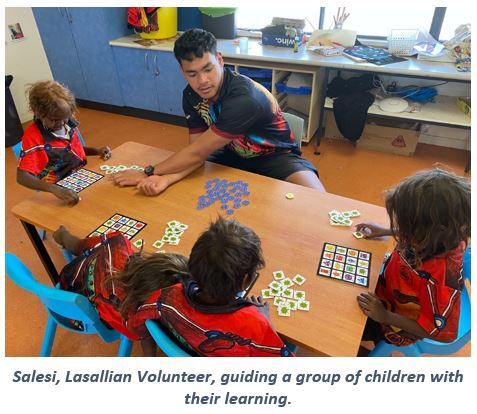