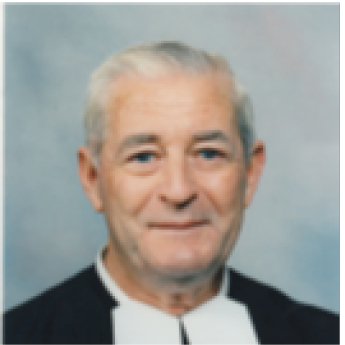 Br Maurice Salmon: "The Spirit is moving in me:

(Br. Maurie, now in his nineties gave an entertaining interview on 30 October, showing his sharp memory and broad, humane outlook)

Marrickville in Sydney’s inner west prides itself on its beguiling multicultural features and its immigrant background. It is also a storied locale for working-class Catholic history with the Passionist parish, and the schools of the Good Samaritan Sisters and the De La Salle Brothers. Br. Maurie Salmon, as he is known, came from those crowded streets.

The third of seven siblings, 6 boys and one sister, Daniel knew what it was like to get in, and make do, during the Depression days of the 1930’s. He knew the embarrassment of his dad’s repairs on his shoes, as he grew academically at De La Salle College, opened in 1932. The formidable and imposing personality of Br. Peter Duffy as Principal was remembered by many.

The family was quite religious: an aunt was a very spiritual woman, and Daniel’s mother reckoned, when the curiosity of male circumcision happened to be raised, assured her offspring that “if it’s good enough for Jesus, it’s good enough for my children!” The solid working-class status of the family required his father to do double shifts as a taxi driver, to the extent of helping to pay a contribution at young Daniel’s entrance to the Brothers’ training college at Castle Hill in 1943.

War years in the training house meant self-reliance in the rural setting, 12 kilometres from Parramatta. The produce to feed 15–18-year-old boys came from the pigs and cows on the farm, the poultry yard, and the vegetable patches. When Daniel, now Br. Maurice, was posted, at 18 years of age, to Katoomba in the cool wintry Blue Mountains, he noticed that his “Letter of Obedience” had scrubbed out a well-known Brothers’ college in Ashfield, Sydney. Acceptance, whatever was asked of an assignment, was par for the course, in the spirit of the vow of obedience.

Maurice must have made a strong impression as a teacher and Brother, for the following year, 1947, he was appointed back to Castle Hill as the ‘Prefect of Junior Novices’ for two years. At nineteen, he was teaching boys, some two years junior to himself. His talents were noted, for in 1953 he was posted as one of three pioneer Brothers to Aotearoa New Zealand, in the small town of Blenheim. It was a taxing three years for – as he says - “a fiercely independent” young man, living with two older Brothers, in the cloistered regime of life then.

Thirteen fulfilling years at the Brothers’ second foundation at Mangere (Auckland) followed: it was a broader field of ministry. Maurie called them “wonderful years”- of wider relationships and fraternal activity. The community cook, observing him returning from school with a mountain of students’ books to correct, said to him ““so that’s how you get to heaven!”  A sadness came with news of his mother’s death; it was the same lady cook who arranged his flight home for the funeral.

As a young Australian Brother working overseas, he says that “I am the sole survivor of that (Blenheim) community, and I am both proud and grateful for having been part of what has become such a successful and fruitful sector of our District, producing such Brothers as David Hawke, our present Visitor, Sir Patrick Lynch, both of whom were my students at De La Salle, Mangere, Peter Bray (President of Bethlehem University) and others”.

When asked the big question of why become a teaching Brother, and bear with the sacrifices and vicissitudes of that life, he could say in his forthright way that it was “my way of getting to heaven, with whatever was required in the lifestyle”.

One such hardship was a year looking after feisty, boisterous boarders in an Australian country school, where the facilities were becoming somewhat rundown, and staff hard to find. When a confrere said “we always think things are worse than they are”, his thought was that his plight “was far worse than I could ever imagined!”

Br. Maurice’s capabilities were highly recognised, with appointments over nineteen years following, as Principal of three De La Salle schools at Revesby, Lithgow and Bankstown, in succession. He understood that educational leadership was demanding in its execution, and he stood the course for two decades. There was the reality of considered collaboration, and the needful delegation of duties. One huge task was always finding adequate professional staff.

As for in-service and pre-service training, Maurice emphasizes the critical need for exposure to teaching and the local school system for aspiring teachers, with the thought that “accountability has gone to the extremes, with more precedence to it, than the job itself” through the growth of bureaucracy. (This view is heard from other seasoned teachers).

Moved to the somewhat idyllic setting of De La Salle Cronulla in 1992, he took up enthusiastically the tutoring of mathematics with senior students until 2010. There was even introducing one student to Latin, which he wanted to present later at the HSC. The Catholic boy told his father it was like going to Confession to a priest!

Those senior years saw Maurie offer service as the Spiritual Director of the local St Vincent de Paul Society. In his later years of life, he has relaxed with a compatible number of other retired Brothers, as well as persevering through health problems.

At 94 years of age, and the District’s second-oldest Brother, his world has changed massively over the decades. What has remained constant has been what a religious vocation is all about: “doing what you believed you were called for, despite all the ups and downs” …no big flashes of insight – but the “spirit that was moving in me”.