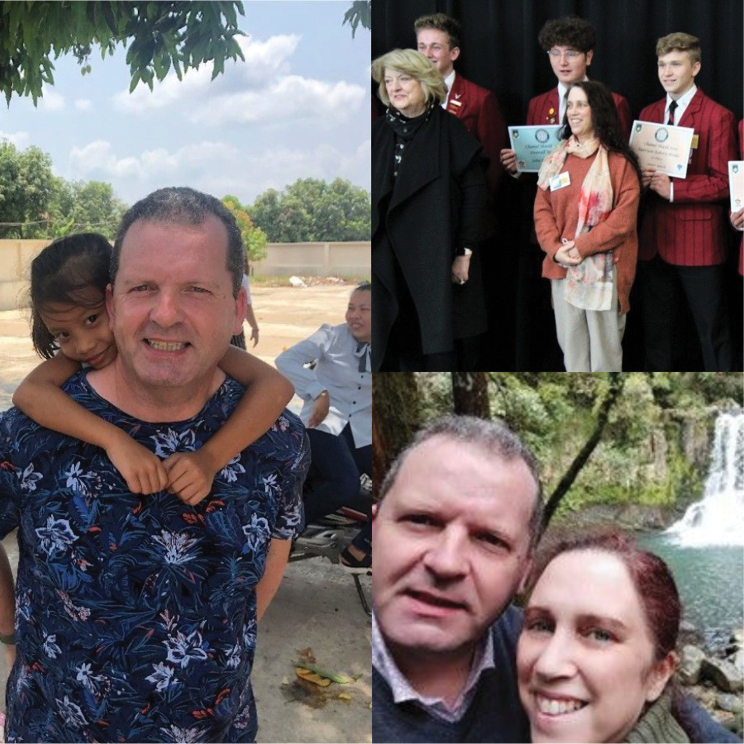 Dance-class partnering with senior students, and cultural immersion in Cambodia – just two instances of Karen and Stephen Bloomfield’s teaching/leadership at John Paul College, Rotorua, Aotearoa. Both British by birth, they have found career and Lasallian ministry a fulfilling life venture.

They were both qualified teachers in Britain, Karen in American Studies and Divinity, and Stephen in English and Drama. Karen’s primary teaching gave her much enjoyment in students finding and defeating “stumbling blocks to learning in Maths”, while Stephen, brought up in a family of six siblings, saw himself, he says, avoid the pleasures of Grammar school, before he took up teaching, with a renewed interest in his Catholic faith.

Stephen sees some truth in “a vocation grabbing hold of you, and I particularly remember the teachers who had made a difference to my life, not necessarily just by what they did in the classroom, but the education I gained outside the classroom on school trips, retreats, sports teams they ran and the compassion they showed in times of need”.

A Drama teacher for 14 years overseas, Stephen has been at John Paul College (JPC) for 16 years now, and is Deputy supervising international students among other duties. He sees his main role as “bearing witness to the Catholic and Lasallian ethos. Everything is informed by this”. Coming to New Zealand with Stephen and two teenage children in 2005, Karen joined the staff at JPC, teaching Maths and with her Masters in Religious Education, became Director off Religious Studies (DRS) in 2010.  Challenges in her role include recruiting RE teachers, there being no RE training programs in NZ. Changes in R.E. curriculum to a University Approved course is significant too.

Karen sees JPC as a large co-education high school which has a “family atmosphere”, through a House structure, and peer activities of seniors with juniors – inter-House haka and Tabloid comps, and seniors’ organization of fun activities during their JPC Day. There is also peer mentoring with after-school homework club, and coaching sports teams.

John Paul College, with a sizeable number of international students, gives a global perspective, opening up exploration of big-picture issues, like diversity and racism. An annual International Food Festival is one instance. Foreign students get the opportunity to immerse themselves to an extent in an indigenous culture, often becoming fascinated by the Maori tradition.

The couple’s involvement in the Lasallian ethos “was a natural and easy progression: making a difference in the lives of young people not just in their education, but in their values and faith is part of our what we have always done or experienced”. For Karen, the Lasallian focus is on “inclusivity, support and care”, the strong emphasis on social justice, including supporting student families who may be struggling. The Atawhai committee involved in restorative justice work is another example of support. Stephen adds that “Lasallian” also means an excellent education, as well as growing in values – respect for all, care for the poor and that social justice awareness.

Karen and Stephen are heavily involved in social justice activities, taking two separate groups of students to Cambodia to work in the small Lasallian school in Po Thum (just outside Phnom Penh), firstly in 2018, and then again in 2019. They spent a week working with local students, teaching them English, crafts and other activities.

Other beyond-the-classroom involvements are in youth ministry liturgy – the monthly parish youth Mass, a Year 13 Lenten liturgy for the whole school, Caritas appeals and the Christmas Shoebox appeal.  Liturgy and social justice, hallmarks of Lasallian teaching.

In recent years, the Bloomfields have become involved in the New Zealand Sector Mission Council, in partnership with our other New Zealand Lasallian schools, De La Salle, Mangere and Francis Douglas Memorial College in New Plymouth, contributing to the development of special projects and the faith development of students and staff. They participated in the first Aotearoa-based youth camp with young student leaders, held in January 2021.

Beyond the College and its commitments, Karen and Stephen enjoy camping and walking in the countryside, and as carers of the earth, the garden. Stephen, a good Liverpudlian, from childhood days, goes crazy enough to sometimes get up in the darkened hours to watch the Mighty Reds live, on the other side of the world.