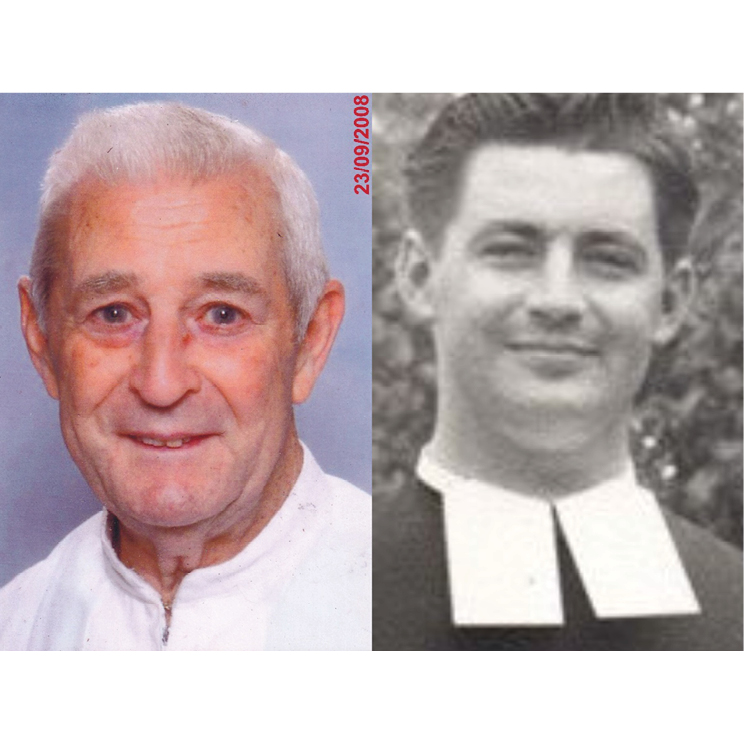 We pray for the eternal rest of Br Maurice Salmon

We pray for the eternal rest of Br Maurice Salmon who passed away peacefully on the 14th November 2022.

In 1947, after teaching only one year at Katoomba, he must have made a strong impression on someone because he was appointed the Prefect of Juniors in 1948, at the ripe old age of just 20.   He was a member of the pioneer community at Blenheim in 1953 with Julian Watson and Dunstan Bourke.  What a trio!!  He must have created another strong impression there too because he was appointed the Principal of Mangere East, Auckland, in 1957. He was now approaching 30 years of age!!

Maurice loved his years in Mangere.  “Wonderful years”, he called them.  The community cook observed him returning from school one day with a mountain of books to correct.  She commented to him one day, “so that’s how you get to heaven!”. Maurice’s reply was: “I hope it helps!”

In more recent years he wrote of his days in New Zealand and reflecting on those years as a young Brother working overseas, and I quote:  “I am the sole survivor of that Blenheim community, and I am both proud and grateful for having been part of what has become such a successful and fruitful sector of our District, producing Brothers such as David Hawke, our recent Visitor, and Brother Sir Patrick Lynch, both of whom were my students at De La Salle College, Mangere.”  He was very proud of that!  Br David has apologized for not being with us today as he had a prior commitment in the Highlands of PNG.

In 1971 he was appointed Principal at Revesby Heights,  then at La Salle Academy, Lithgow, in 1979.  That was followed by a stint as Principal at De La Salle College, Bankstown (1987-1991) before retiring to tutor Maths students at De La Salle, Cronulla, in 1992.  One student at Cronulla wanted to study Latin to HSC so Maurice was asked to help him.  The Catholic boy later told his father it was like going to Confession to a priest!  I am sure that his vocab of Latin words and his declension of verbs would have been superb by the time Maurice had finished with him.

He concluded his active ministry, in the past decade, as Spiritual Director for Men’s & Ladies St Vincent de Paul Conferences at St Aloysius Parish, Cronulla, from 2010 until recently when age & mobility took its toll.

So where did his life begin?  In Marrickville, of course!  The third of seven siblings, 6 boys and one sister, Daniel knew what it was like to make do as he was growing up in the Depression years.   But he was also a very creative young man and once built a pond in the family’s 2m x 2m shed at the rear of the garden.  He then carved sailing vessels out of wood, to sail and race on his pond.  His brother Bill admired his creative genius in this regard.

His dad worked double shifts as a taxi driver to help make a contribution when Daniel entered the Brother’s training college at Castle Hill in 1943, aged 15.  He had wanted to go earlier but his Dad made him wait.  Wise man, his Dad!

When he was once asked why he had wanted to become a De La Salle Brother, he replied in his forthright way that it was “my way of getting to heaven, with whatever was required in the lifestyle”.  He knew what he wanted from the beginning and he was faithful to his calling all his life.

This year, even as he approached his 96th year on this planet, he could be found every morning at 8am watching the Mass celebrated on TV in this church.   Then he checked his emails and began his spiritual reading for that day.  At 3pm every day he showered and began his daily ritual of caring for his skin as he had suffered for many years with psyoriosis.   He never abandoned his daily Mass, prayers, rosary and spiritual reading no matter how low he might be feeling.  He was a remarkably patient, gracious, prayerful & faithful man to the end.

His dying wish, which he expressed to me in recent weeks, was his desire to return to his bedroom at Cronulla, sit looking out to Gunnamatta Bay, and, in his words “just die!”   I replied: “Unfortunately God doesn’t work like that, I don’t think!”  He just smiled.   He was anointed 5 times in his 5 weeks in hospital so we think he was ready as one could ever be to meet his maker.

Maurice was particularly close to his younger brother, Bill & his wife, Zel and their children: Chris, Deborah & Mychelle.   He took a week of his annual holidays with them, frequently visited them until he stopped driving, and they were with him until the end.  Their support of Maurice has been admirable and he has made a lasting impression on those family members whom he has known.

The Brothers’ community here in Cronulla also wishes to express our gratitude to all those who have supported Brother Maurice during his final weeks.

Maurie entered the Sutherland Hospital in early October and was transferred, on his doctor’s advice, to Dr Gomez at Prince of Wales.  The medical and nursing attention he has received in both places was excellent and we are very thankful for their attention to Maurie in his most challenging days.

Br Vincent Keating was asked to support Maurice as he is now resident in Kensington.  He has been there twice a day throughout and ensured that, whilst he could, Maurice had Holy Communion every day.  He also arranged for the hospital chaplain to see him.  Brothers from Karlaminda and Parmenie also visited Maurice and he would have deeply appreciated their presence.  Fr Terry anointed him for the last time last Wednesday and, when asked by Fr Terry if he wanted to be annointed, Maurie spoke the only word we had heard from him in days:  “YES!”  it was loud & clear!   No doubt at all!

Maurice has been an inspiration to so many who have known him over the years.  The Salmon family were always very close to their ‘Uncle Dan’.  The Brothers have always spoken of him with very high regard for his person and his faith, and , I might add – his good humour.  Br David is on record as saying that he owed his vocation to the man who taught him, Br Maurice!  I am sure he has inspired many throughout his life as an educator and as a man of faith.

As his grand-nephew expressed it on Facebook last week, and I quote:  “Uncle Dan…..  A great man with a fantastic sense of humour.  Servant of God and education”

Or as one of his former colleagues in DLS Cronulla wrote on the same page: “ A truly wonderful man whom I had the absolute pleasure of working alongside for many years.  I can hear his laughter and see the twinkle in his eye right now.  Rest in peace and take your reserved place in heaven Br Maurice.”

Well done, good and faithful servant.  May eternal light shine on you forever.